You Are Here:Home / Innovation / The four pillars of failed innovation
Innovation , Sentient December 8, 2015

The four pillars of failed innovation 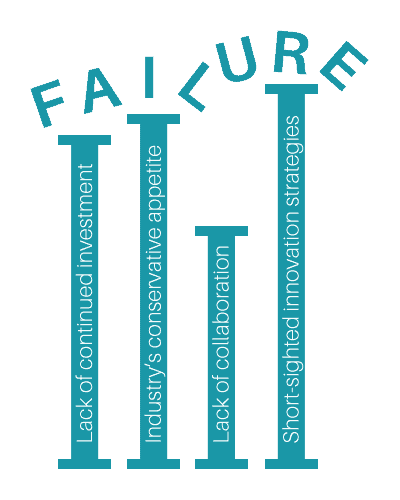 Innovation is heralded as the key to success in a challenging economic environment. But actually becoming innovative is a lot harder than it sounds.

As we all heard yesterday the Federal Government is making great strides to boost innovation throughout the country with a package worth $1 billion announced.

Firstly, the government should be commended on this strategy to increase economic prosperity through innovation; it truly is where a significant amount of future spending should be directed.

In it the CSIRO referred to the World Bank’s description of innovation as “the main source of economic growth, it helps improve productivity, it is the foundation of competitiveness, and it improves welfare”.

It went on to say that companies which innovate grow faster and are more profitable than those that don’t. “Studies also show that innovation is the number one driver of productivity in the Australian oil and gas industry,” the report reads.

Australia has had marked success in the realm of innovation with examples such as horizontal and hydraulic fracturing doubling global estimates of remaining recoverable gas reserves.
Innovation has also helped unlock new resources, optimised operations and created completely new markets – which the CSIRO report highlighted.

Without innovation we will not succeed in improving the way things are currently done. And yet, being innovative is a significant challenge.
Perhaps the biggest problem we face now, particularly in Western Australia, is companies’ risk aversion in a challenging economic environment.

How does a company decide to risk capital by taking a punt on an innovation project when money is tight? It’s a tough decision but without continued investment, innovation is near impossible.

The CSIRO report referenced this as one of four pillars which makes innovation in the resources sector challenging. The other three key factors were the industry’s conservative appetite, lack of collaboration and short-sighted innovation strategies.

Generally, in Western Australia we are not known well for working together on innovative projects.

In contrast, companies which present innovation success stories have common traits; collaboration, measured risk-taking, perseverance through failures and set-backs and a visionary leader who recognises the long-term opportunity early and inspires others.

In short, you will not be innovative if you do a half-hearted job. However, the point on “measured risk-taking” is pertinent.
Instead of investing everything you have in one project which has the potential to fail, opt for smaller projects which allow you to “fail fast”. The sooner problems are recognised the better – that way you are able to reassess and continue building on what you have learnt.

It’s also important to look to the long term. CSIRO Futures recognised that companies are often under pressure from shareholders to innovate so as to fix a short-term problem. That may be great … if you’re content with working on an ad-hoc basis and not looking at the potential to innovate across your business as a whole.
In the heat of the global financial crisis founder of Amazon.com Jeff Bezos said; “I think frugality drives innovation, just like other constraints do. One of the only ways to get out of a tight box is to invent your way out.”

For Western Australia, that time to invent is now.

Sentient Computing awarded contracts worth half a million dollars